Some old friends of mine, Hilda and Mitchell, are having a baby... very soon now.

As Hilda and Mitch hail from Barbados, the colours of the party are based on the Bajan flag and organiser Joan's brief was chevrons and pom-poms. 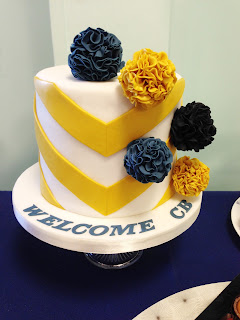 Since early on the baby's been known as the Cocoa Bean, shortened to CB in all communication. 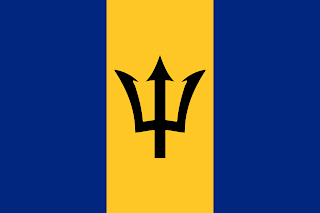 Hilda's lovely friend Joan organised a baby shower from across the Atlantic, which was impressive.

At one point though, I really didn't think it was fated that I would get to the party.  I was stuck for hours between junctions when the M23 was shut down, had to go cross country to get around (had to navigate a couple of ditches and a gravel road on the way to the A24), diversions on the A24, very heavy traffic on the M25, severe delays on the M4 so went for the M40 only to find that was shut down for 3 junctions too.  Eventually got there just as the guest started to arrive rather than the very, very early arrival I'd planned for... thank god for my OCD contingency time scales!

This was my first chevron cake and I used the Jessica Harris, waxed paper transfer method (see her craftsy class @ http://www.craftsy.com/class/clean-and-simple-cake-design/209?_ct=sbqii-sqjuweho-dum&_ctp=4&rceId=1437656063514~ohxnsua5).

The thing I would change for next time though is that I mixed Culpitt gold flower-paste with the cocoform. I wanted the yellow to be irredescent but didn't want to screw up the straight lines by painting it afterward.  That gold flower paste is so ridiculously hard to use and it made the cocoform much less stable so I had to make the chevron's thicker than I would have liked and it bugged me every time I looked at the cake.

Congratulations H&M,
CB, really looking forward to meeting you,
Joan, it was lovely to meet you,
Jason, Happy Birthday,
Everyone else, it was great to see you
xxxx

Another cake for the portfolio.

This one a dummy cake practice run for the pink and mint wedding a couple of weeks ago. 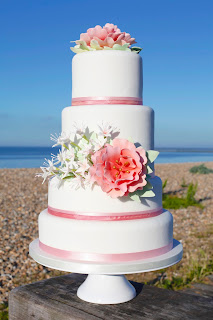 Posted by Kasserina at Wednesday, July 15, 2015 No comments:

A special cake this week, a gift for lovely friends. 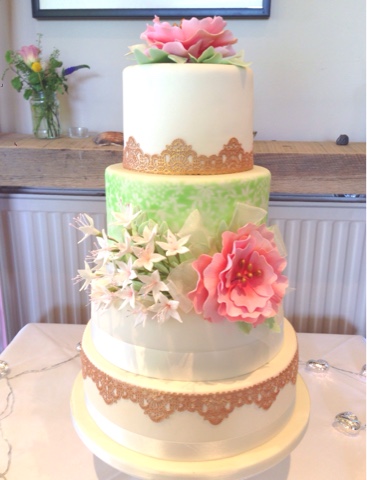 The colour theme was blush pink and mint with vintage gold.

I made the flowers a couple of weeks ago, pink open peonies with gold stamens and star blossoms. 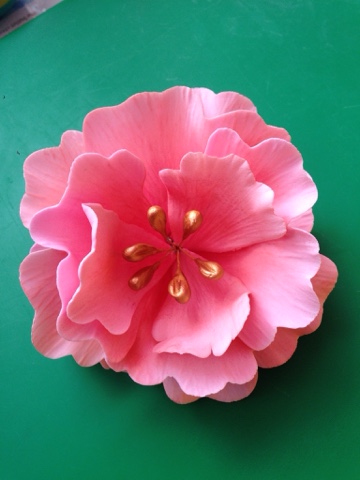 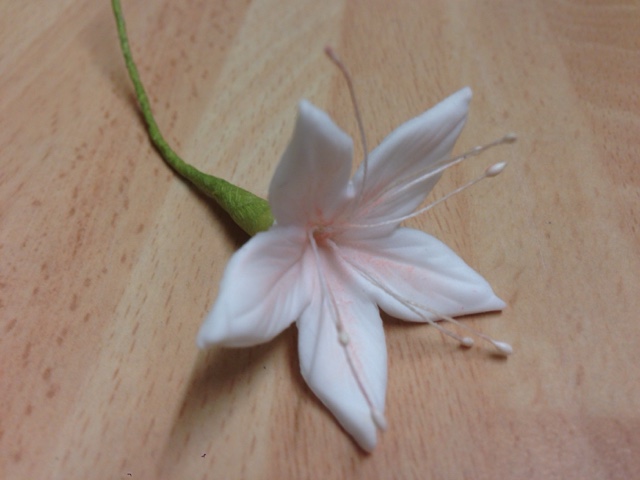 I made them a bit more robust that I might usually as I knew I would have to transport them quite a long way and on a ferry to the Isle of Wight.  I really didn't want them to break befor I could get then on the cake.

The tiers were all sponge cakes,from top to bottom: Victoria sponge, chocolate fudge, lemon and almond drizzle and red velvet.

It was a record breaking heat wave, which always makes things fun when you're playing with buttercream, but having to take the cake on a ferry where you're not allowed to keep the engine running and the aircon going was an added bonus.

Still, (as I am inclined to do whenever I can) I used a white and dark chocolate ganache crumb coat or marzipan to give a crisp finish and extra support under the fondant. 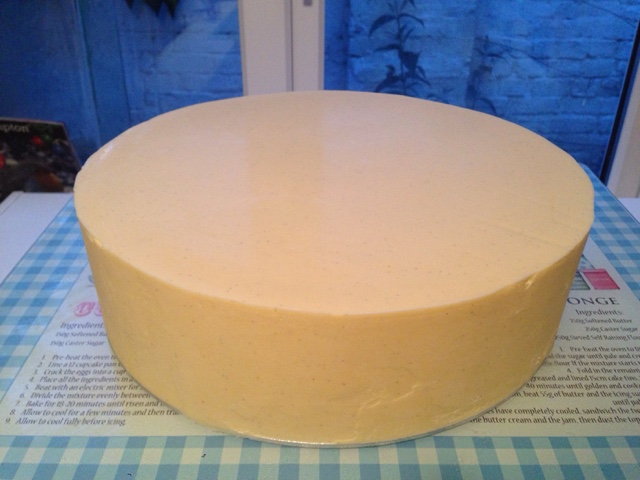 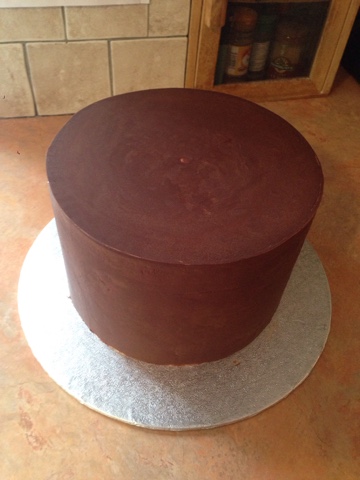 The upside down crumb-coat gives a defined edge to the cake and ensures that you keep the cakes as perfect circles and don't end up with egg shaped tiers instead!

The lemon tier I covered with marzipan and gave it a rounded edge for contrast.

I airbrushed mint edible colour through lace fabric for the 8", chocolate tier and then a pale antique silver / gold lustre over the entire cake to make the whole thing shimmer and to take the "GOLD!" edge off the cake lace elements.

The journey was fine, air-con helps, and the only breakage was one peony petal, but of course I had spares so not a major issue.

I stacked the cake on site and added the flowers, thank god I took an electric fan with me though as it was boiling hot down by the kitchen and I'd have lost all sense without it!

Then it was champagne and laughter all the way with lots of old friends who had gathered from across Europe to be with the happy couple on their big day. 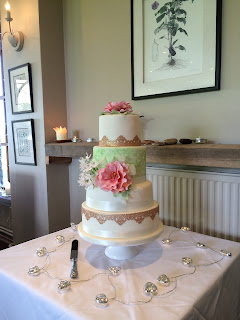 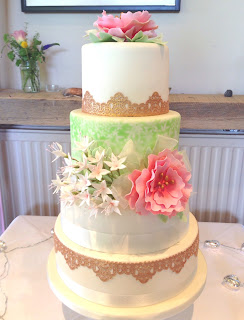 It does make a change these days to be there when the cake is eaten.  Lots of people kept rushing up to me to say how good it was, including the kitchen staff at the hotel.  I'm told the groom said it was the best cake he'd ever tasted... naturally 😉 (Thanks lovely x)

Honestly, it was such a beautiful wedding.  We are so glad to have been there and been able to share in it.  Wishing you both many, many beautiful days in the future. xxxx
Posted by Kasserina at Monday, July 13, 2015 No comments: