A tower of chocolate and salted caramel. 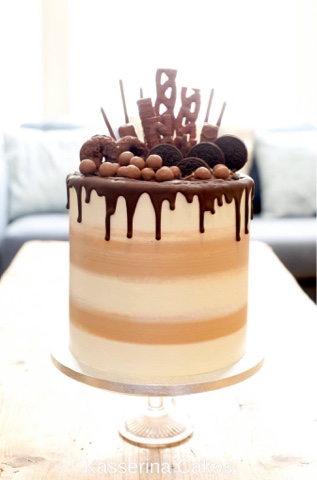 And fabulous message from lovely customer.  It's such a bonus when people take the time to send you feedback.   Thanks so much Victoria, and happy birthday Tom! 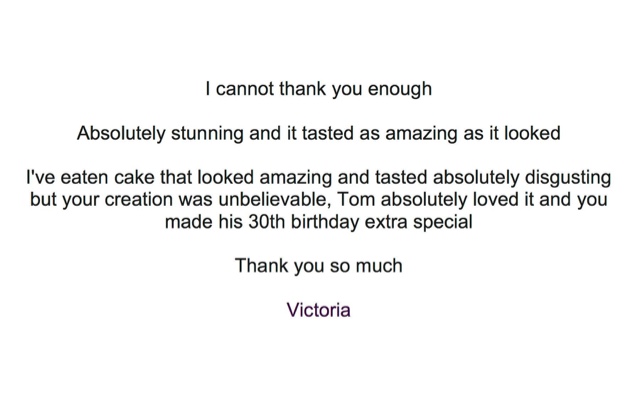 Another excellent wedding inspiration article from Charlotte at Hitched featuring mine and many other Superhero inspired Wedding cakes.  Some great ideas here! 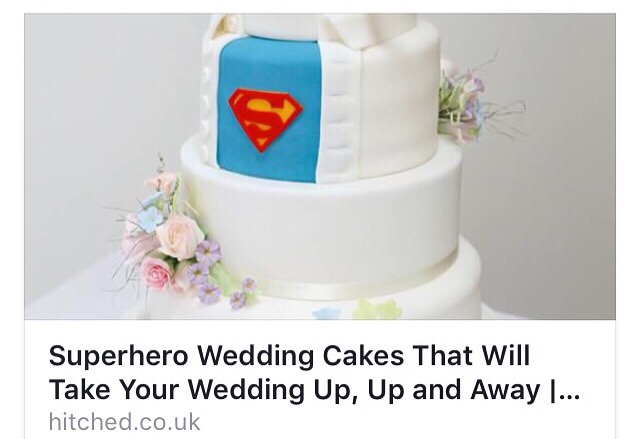 Another spray for an Etsy customer.

If you're looking for cake toppers, whether you're a professional baker who's short on time, an amatuer baker or a DIY bride, do get in touch via www.kasserina.com

Or go to my Etsy shop at
https://www.etsy.com/uk/shop/KasserinaHome?ref=hdr_shop_menu 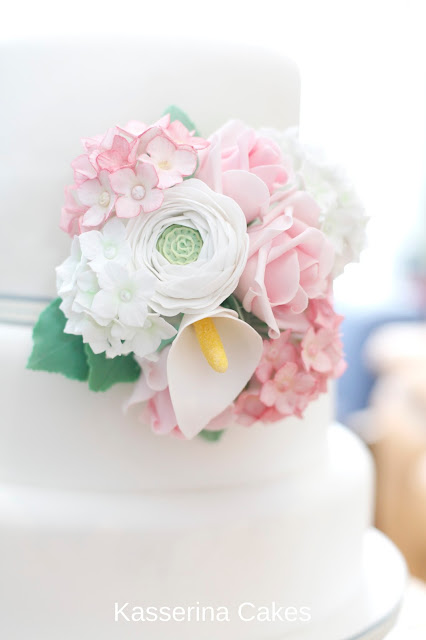 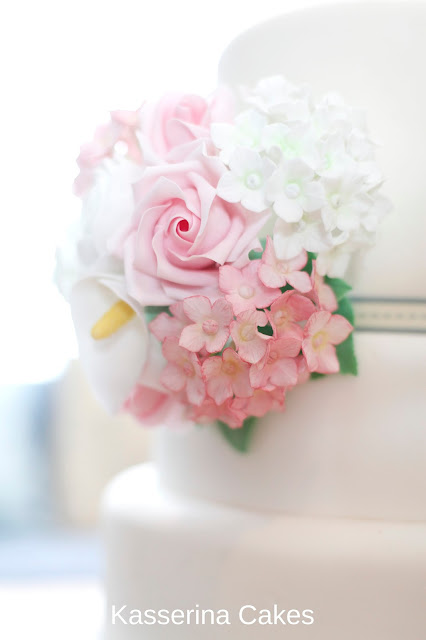 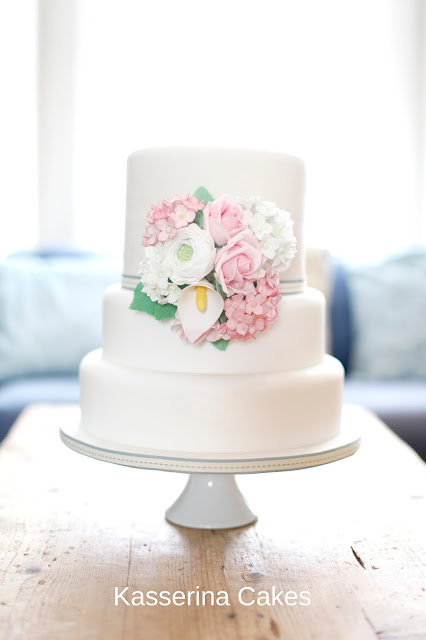 Posted by Kasserina at Tuesday, August 02, 2016 No comments:

There are so, so many things you could pick to put on and Alice cake! The bride especially is a big fan of the books, the original Tenniel illustrations, and the various disney films so we talked about what are her favourite things from each.

So, first thing was... the sketch. 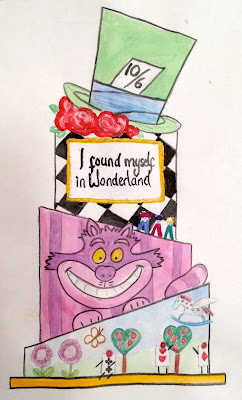 Next I started to make all the bits and pieces that were to go on the cake. 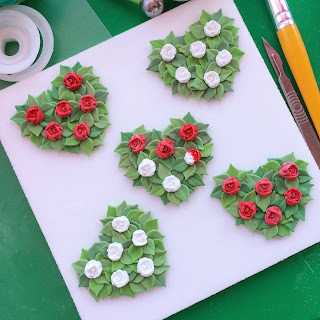 Now, the problem with a design like this is that there is so much you can't do
until you've baked, crumb coated and covered the sponge...and you can't bake too far in advance because you want the cake to be fresh!

I expected not to get much sleep for this one. 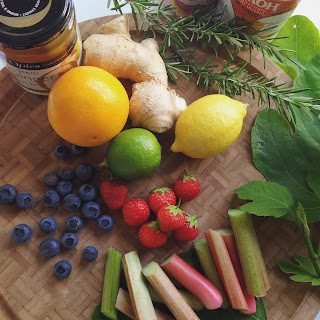 There were some things I could do in advance though, so I slow roasted some strawberries and rhubarb.  The rest had to wait until closer to time. 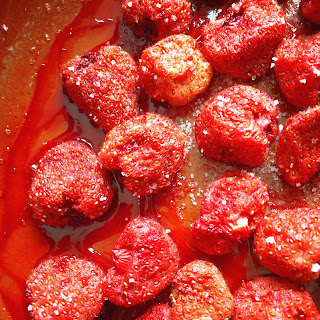 It's easy to underestimate how much goes into a big tiered cake.

Just as a quick guide, an average home baked cake would use around 4-6 eggs.
This cake used 58. 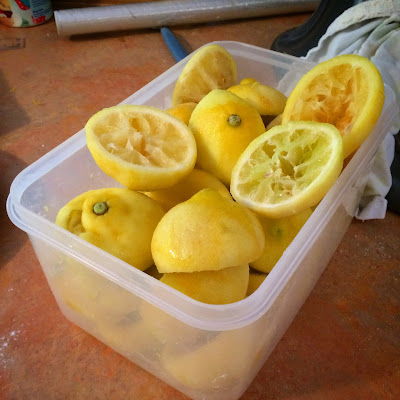 Now, the topsy part.
First, I did lots of research.  There are two basic methods:
1. make the top a big slope and rely on friction and maybe a central dowel to stop it sliding sideways and
2.  cut the slope, but then hollow out the middle so it's level so the weight is spread in the usual way.

Because it was going to be a tall cake, that I was going to have to transport quite a long way, I chose the second.

Of course, what the research didn't initially tell me, and what I soon came to
realise was;
* all the demo cakes had a big difference between the size of the tiers (so when you cut out, there's a substantial rim that can support itself).   My design was using the modern style of tall tiers with only an inch shelf on each side.

* There was a real danger, if I followed the instructions I'd seen, when I put the fondant covered tiers together that the icing would be damaged because once the fondant was on I would be trying to put a 10¼" diameter cylinder into a 9¾" hole (and with a rim only 1 inch wide in the first place, there wasn't much margin to fix this).  I was certainly not going to be able to decorate the tiers before stacking.

As you can see below, I decided to make the rims a little narrower and reinforce them with skewers, then I covered the tiers in fondant.
I used Carma Massa Ticino.  I like this sugarpaste for lots of reasons, but in this situation it's perfect.  It's got such flexibility that I could roll it thinner than some (so less danger of it fouling the next tier)  and it stretched well so I could get it nicely shaped around the carved cake without the danger of it tearing like the awful sugarpastes I was forced to use at my old bakery 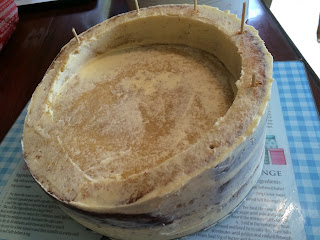 Even though I'd cut the rims a little smaller, they still did foul slightly.  Looking the photo below, you can see how the top of the pink tier has been pushed out slightly and the skewers have in turn shifted the lower layers sightly causing it to look a bit like it's slumped.

I decorated the tiers once it was all stacked. 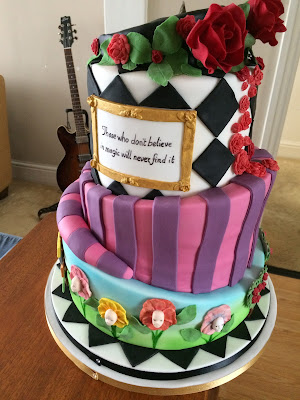 I used a central dowel to ensure that there was no chance of the whole thing shifting sideways en route.  I've tried sturdy cake stackers twice and wasn't impressed either time.  I'll stick with my screw, washers and wooden dowel method.

To make the hat tilt, to make sure it was well anchored, and to put the wired roses into I cut a poly styrene wedge and covered it completely in black fondant to seal in any bits.

A wedding cake is going to sit there a long time, and it was a hot day, so it's important that the top cake, which was going to be on a tilt, couldn't shift sideways.  Inside the hat is 2 layers of strawberry cake, with a rice crispy treat base.  This gave it the strength needed to stake it into the poly separator.

The brim of the hat was made of a mixture of modelling chocolate and fondant, so it had the strength and malleability of the chocolate, but it would take the same edible paint as the the top when I airbrushed it. 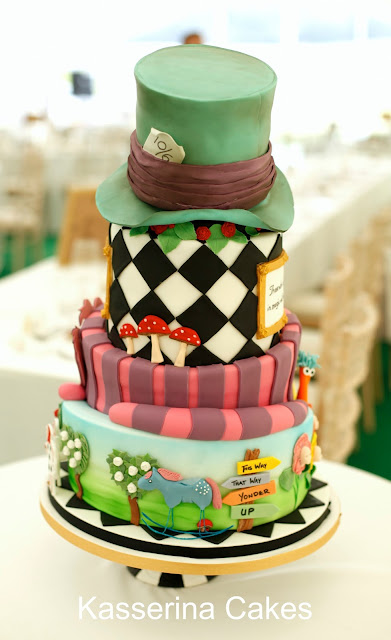 I put a lot of the pieces on at the venue, and placed the hat on top. 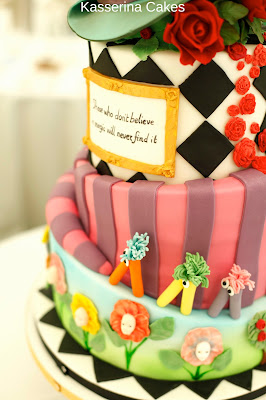 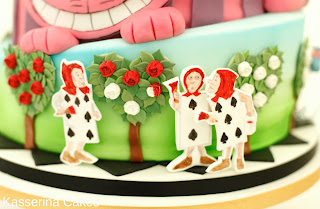 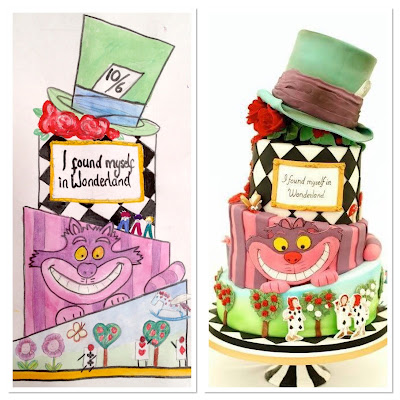 The final touch, and something I was quite pleased with, was the stand.
I saw a great vintage styled cake dome which had black stripes on it, but couldn't find a stand like that anywhere... so I painted one of my white stands with black acrylic paint.  I really think it looks so much better than a simple white stand would.

The whole place looked amazing though.  Heaven Farm is a magical place and all the styling and little touches were so well thought out.

Best of all though, look at the lovely message I got from the happy couple the next day... 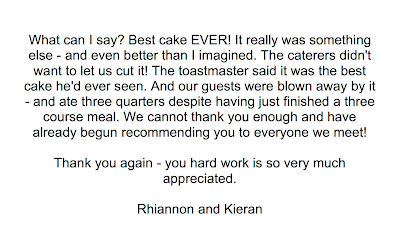 Wishing you both all the luck and love in the world.  I know you'll be very happy.
x Kass x